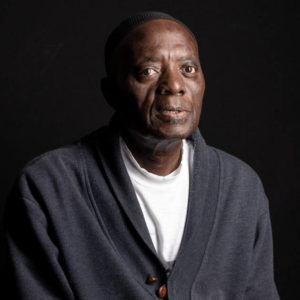 Born Isaiah Maishe Maponya, the son of a painter in Alexandra township. When Maishe was 11, the family was forcibly removed to Diepkloof under the Apartheid laws. He became an insurance clerk and began writing for the theatre in 1975.

He completed a masters degree in Theatre Studies at Leeds University and became a lecturer at the University of the Witwatersrand Drama Department in 199*.

In 2001 he was appointed Director of Arts and Culture, with the Department of Arts, Culture, Technology and Science.

Maponya writes serious political theatre, and calls his plays “theatre of the dispossessed”, believing that theatre is one of the most dynamic ways of raising the consciousness of Black people in South Africa.

In 1975 he founded the Bahumutsi Drama Group of Soweto, thenceforth writing and producing his plays for them. During the 1980s the plays were also performed at the Market Theatre, and in 1983 The Hungry Earth (now directed by Ian Steadman) played at the National Theatre in London as a platform performance , and subsequently toured Britain and Germany along with Umongikazi. Harrassed and intimidated by security police during the Apartheid years, he was refused a passport in 1984 to accompany his plays abroad.

Besides often directing his own work, he also directed plays by other writers, such as by Trevor Rhone’s Two Can Play (1992) and in 2008 Place of the Rock – How The Land Was Taken (a one man play, based on the writings of Sol T. Plaatje). –ESAT