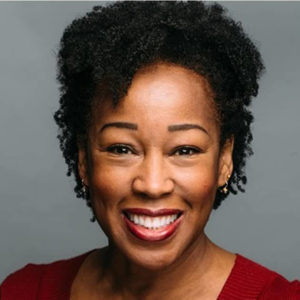 Growing up in the steel mill city of Springfield, Massachusetts, living with her parents, and four brothers, being the youngest child and the only girl, her imagination became her best friend. During her teen years, She studied music and dance, ran track, played tennis and watched lots of movies. At the age of 11, She was deeply moved by a 25 year old actress named Cicely Tyson in The Autobiography of Miss Jane Pittman.

Years later, being deeply involved with the Arts, inspired her to become Co-Founder of The Commonwealth Theatre Alliance in Springfield with her mentor, Broadway Dancer, Clinton King, Jr. The outreach program for inner-city youths, provided dance and acting classes and their performance credits included: musicals, such as Purlie Victorious to dramas, such as Arthur Kopit’s, Chamber Music.

JoAnna got her start in professional acting after a move to Boston, where she got the chance to be in local theatre projects, commercials, instructional films and on TV. While in Boston, she appeared in For Colored Girls Who Have Considered Suicide, When the Rainbow is Enuf with Marla Blakey, Speaking Out of Character: Women in Theatre with Estelle Parsons and Hamlet with Tina Packer, directing. And TV projects such as the American Playhouse Film The Trial of Bernhard Goetz and on the 80’s TV drama Spenser for Hire.

Upon moving to New York City, JoAnna’s career continued to catapult, with an appearance on The Cosby Show and in plays such as The Tempest, A Midsummer Night’s Dream, and To Be Young, Gifted and Black. Hurt Village by Katori Hall,The Bluest Eye , Crumbs From the Table of Joy , Our Town , From the Mississippi Delta , The Odyssey by Derek Walcott. She also starred in The Trial of One Shortsighted Black Woman vs. Mammy Louise and Safreeta Mae, which won 6 Audelco Awards including Best Ensemble Performance.

JoAnna started up JJ Films LLC in December 2008, and as Executive Producer in 2010, wrapped up production on a film entitled Feeding Pigeons.

In addition to her work as an actress and a producer, JoAnna also is a freelance acting coach and mentor to young women hoping to achieve their life’s goals. One of her immediate goals is to develop a non-profit The HARTFoundation Mentorship Program.