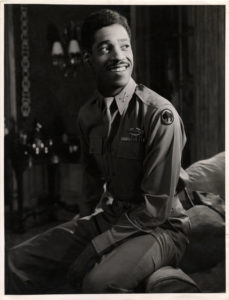 A multi-talented performer, Seifield Gordon Heath was born in the San Juan Hill district of Manhattan on September 20, 1918.1 Heath and his half-sister Bernice were raised in a family of relatively recent immigrants: his mother, Harriette (Hattie), was a second generation American of African and Indian descent while his father Cyril Gordon Heath came originally from Barbados. As a steward for the Hudson River Night Line, Cyril had steady employment and in his later years, he was a devoted public servant, active in the local YMCA, neighborhood associations, and church-sponsored groups.

While studying at the Ethical Culture Society School in Manhattan and later at the Hampton Institute, Heath was drawn to the theater. As a child, he sang in St. Cyprian’s Church choir and learned to play the violin and the viola with some skill, but the acclaim for his music was soon overshadowed by the attention he received on the stage. Winning a state-wide drama competition while still in high school, Heath began to get serious about acting, perhaps in reaction to his father’s aspirations for music. In 1938, Gordon began to write and perform sketches for radio station WNYC and about the same time, he began training with a group of African American actors under the guidance of Marian Wallace. While in college at Hampton, he acted in several plays under the direction of his childhood friend Owen Dodson.

Heath landed his first Broadway role in 1943, playing the second lead in Lee Strasberg’s South Pacific. Two years later, while working as a radio announcer, he was chosen for the lead in Elia Kazan’s Deep Are the Roots, a provocative Broadway “race play.” Playing the role of Brett Charles, an African American war hero who returns home to find that the “fight for democracy” in Europe had done little to change race relations in the Jim Crow South, Heath enjoyed a fourteen-month run in New York followed by five-months in London in 1947. In between, Heath made his directorial debut in the off-Broadway Family Portrait, in which he also played the lead. Widely acclaimed for his performances, Heath was soon lauded as “the next Paul Robeson.”

Although a generation older than most of the artists associated with the Black Arts Movement, Heath developed a working relationship with artists such as the director Woodie King and writer A.B. Spellman. – profile in the UMass Archives