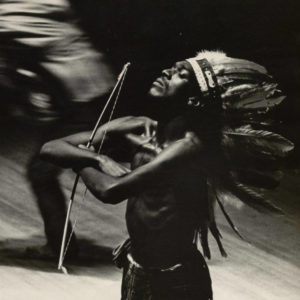 Robert “Bob” Johnson was born on March 31, 1938 in Brooklyn, New York, to Viola Sutton and Fredrick Johnson. He received his foundational dance training at the New York Metropolitan High School of the Performing Arts (now LaGuardia High School of Music & Art and Performing Arts). Johnson began his professional career in 1960 as a member of the Eleo Pomare and Raymond Sawyer Dance Company. During this time, he continued his formal study of dance at a number of New York-based studios. On scholarships, Johnson studied dance composition, Hattian and Afro-Caribbean under Jean-Léon Destiné at the New Dance Group Studio, the Lector Horton Technique at the Clark Center of the Performing Arts, and the Katherine Dunham Technique under Ms. Dunham herself.

In 1965, Johnson traveled to Paris as part of Katherine Dunham’s last professional company and took part in the French movie musical Deux Anges Sont Venus and the film adaptation of Léopold Sédar Senghor’s  Chaka. Upon returning to the United States in 1966, Mr. Johnson took dance instructor positions in Washington, D.C. and New York City. In this same year he made his acting debut as the lead in Kelly Marie Berry’s dance drama,  Black Happenin’. In 1967, Bob Johnson appeared in the N.Y. Shakespeare Festival original production of  Hair. This was quickly followed by a dramatic role in Ed Bullins’ Off-Broadway production,  Goin’ a Buffallo. Between 1968 and 1969 he returned to his dance background with stints with the Harlem Cultural Council’s Dancemobile.

In 1969, Bob Johnson relocated to Pittsburgh, Pennsylvania, to serve as a dance consultant for Project Self Esteem, a collaboration between local universities and youth groups. Members of the University of Pittsburgh’s Black Studies Department took notice of Johnson in this role and offered him a position teaching both dance and drama in the department starting in the 1970-1971 school year. He accepted the post and remained in the department until his death in 1986. His courses included Afro American Dance I and II and Kuumba Theatre Workshop, later renamed Creativity Workshop. It was also in Pittsburgh where he met and married his wife, the former Stephanie Cooper.

In 1970, Bob Johnson founded the Pittsburgh Black Theatre Dance Ensemble which aimed to shed light on the breadth of culture in the African Diaspora to bring attention to issues facing the community through dance. Johnson served as artistic director of the company for a number of years during which time he choreographed signature works such as Free Spirit Song,  Ritual of Damballah,  Ego Trippin’ and  American Fruit with African Roots. Outside of the university and the dance company he founded, Mr. Johnson continued to work professionally as a dancer, choreographer, actor and director. During the summer months, Johnson toured nationally and internationally as a Dancer with Sun Ra and His Arkestra, performing in such places as Nigeria, Italy, France, and the Netherlands. As a choreographer, he crafted dance numbers for local productions such as the musical  Liberty Avenue, and Off-Broadway Plays including  Who Loves the Dancer by Rob Penny and  How do you Spell Watergait by James Durrah. He continued to pursue local stage work and made his film debut in the John Russo horror film  Midnight. Johnson would also go on to direct theater, notably the first staged production of August Wilson’s  Jitney in 1982.

Bob Johnson passed away due to heart failure on July 6, 1986.